Boys Get Anorexia Too

This is my personal account of what our family experienced when my son was struck down by an acute and almost fatal episode of anorexia. The first half of the book is a self-help guide aimed at parents, carers, teachers, sports coaches, and non specialist medical professionals.

It highlights some of the difficulties for men and boys in getting a diagnosis in the first place and provides lots of practical tips on what to look out for and how to get the appropriate treatment if you suspect that a young man you know may be developing an eating disorder. You can also visit me at www.boyanorexia.com 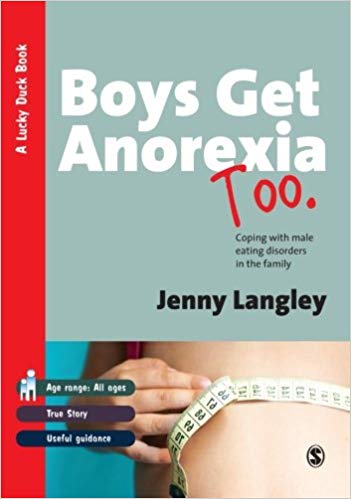 ‘The book is immensely reassuring to any parent who has experienced at first hand the problems that a young boy already caught up in the maelstrom of adolescence can both experience and cause when anorexia arrives. Any parent or carer concerned about a boy who may be developing or has already developed an eating disorder will find this book useful and supportive even when it is talking about the most difficult problems that affect sufferers and their families’
Signpost

`This is a detailed observational account of severe Anorexia Nervosa in a boy, and the effect on his family. It documents their emotional and torturous journey through treatment back to full health. The descriptions of the disorder are written without jargon and with great accuracy. The book is packed with practical tips on how to manage everyday situations. This is truly a book that adolescents, their families, and clinicians should read’
Dr David Firth, Consultant Child and Adolescent Psychiatrist

`’Boys don’t get anorexia’ is a phrase that any parent who is concerned about a son who is losing too much weight or exercising excessively will hear at some time or other. Well, boys DO get eating disorders and in this very personal and insightful book, Jenny Langley looks at what it means to have a son who does in fact have anorexia. Jenny writes about the way in which the disorder crept up on her family and then seemed to take over the household. The slow painful climb of [her] son back to recovery is recounted in uncomfortable detail. Ultimately however this is a story of hope. Joe does recover eventually and although life is by no means the same as before, it does return to a new normality’
From the foreword by Steve Bloomfield, Eating Disorders Association

A clearly described account of adolescent behaviour patterns which can lead to anorexia, written for worried parents, but useful to anyone working either with a boy diagnosed as anorexic, or a member of his family… It offers both sensible and sensitive information as to what to expect, suggests courses of action, and provides lists of resources’
Therapy Today

Our Story and Why I Wrote a Book on the Subject?

My name is Jenny Langley and my son nearly died from anorexia when he was just twelve years old. We simply couldn’t understand what had hit us, but when it did hit us it nearly destroyed our family. Thankfully we all survived, but at times we felt rock bottom. My website www.boyanorexia.com and book, Boys Get Anorexia Too, are designed to give hope and support to any other family going through the experience of boy anorexia.

Whilst eating disorders are normally thought to be a female domain, it is logical to assume that men and boys are not totally immune from eating disorders, but how many incidences of male eating disorders have you heard of? Certainly, up until my son was afflicted I hadn’t ever heard of any examples. It turned out neither had my GP, any of the teachers at my son’s school, nor any of my friends or work colleagues. So it was a huge shock when my twelve year old son started to disappear before my eyes.

He was a talented child, in the streamed class at school, a great sportsman and he was very popular with his peers at school. His anorexia developed startlingly quickly, he lost 25% of his body weight in four months, before collapsing and being rushed into hospital. He was dangerously ill, but once his condition had stabilised he was treated as an inpatient at a specialist adolescent treatment centre for four months. The treatment regime was very strict and extremely difficult for a twelve year old boy to cope with. When Joe finally returned home there were some very difficult moments but the family worked hard together and with the outpatient professional team to ensure the anorexia didn’t return.

Several years further on, and he is a thriving, healthy and happy young man, who is probably stronger both mentally and physically, having beaten his illness. The relapse rate is high for young people with anorexia, but so far so good, and we are looking forward to him having a healthy and happy future. To start with he had the odd setback, which looking back was an important part of his recovery process as he learned to take a breath, reflect on what had happened, and move on taking one day at a time. He is now living and working in London within the footballing community. The obsessive over exercise that nearly took his life has been reframed into a healthy passion for football, which he always had before his eating disorder came to visit.

With the approval and support of my son and family I decided to write a book entitled Boys Get Anorexia Too, in which I describe our experiences, and outline the treatment options available. We felt totally alone as parents of boy with anorexia and hope that this book provides practical guidance, comfort and most importantly hope to families finding themselves in a similar position. In recent years more books and articles have been published on eating disorders in men; the charity Men Get Eating Disorders was launched five years ago, and most national eating disorder charities now have a male section. At the time of our son’s illness there was very little written. There were very few books on male eating disorders, which were very interesting, and at least acknowledged that there had been an explosion in the incidence of eating disorders in the male population over the last few decades. At the time this provided us with some comfort, but didn’t really provide us with any guidance as to the best course of action, being parents in the UK, watching our son starve himself almost to death in front of our eyes.

As I have already said eating disorders are usually associated with females but an increasing number of males are known to be affected. Research as well as anecdotal evidence indicates that as many as 20 to 25% of school age adolescents who are affected by an eating disorder are male. However the number of males diagnosed and seeking treatment is roughly half that. Males and their families can find it hard to believe they may have an eating disorder, if they do seek treatment they may find it hard to get the correct diagnosis and even harder to get the appropriate treatment.

Thus there are several problems facing a family whose son starts to display signs of having an eating disorder:

How do you diagnose an illness, which most people, including non specialist health care professionals have never heard of?
How do you find appropriate treatment for such an illness?
How do you cope with all the shocked reaction from your peers when you tell them what is wrong with your son?
Where do you turn to for moral support if you can’t find a family that has been through a similar experience?
My book seeks to answer all these questions and more.

The book is written in two parts. The first part of the book is intended as an educational guide. It describes anorexia, what it is like to live with a boy suffering from  anorexia, possible triggers, signs to look out for, effects on the family and the fact that boys get other eating disorders too. It also provides practical tips on how to cope with boy anorexia, treatment options, how to return to healthy eating and normal life and the importance of the carer(s) taking care of themselves as well.

The second part is a detailed and harrowing case study based on our experiences. Anorexia crept up on our son and then seemed to take over the whole family. We breathed a sigh of relief once he was taken into a specialist in patient unit, but little did we know how hard the treatment regime would be. A fragile emaciated 12 year old boy thrust into a world of teenage girls with a wide array of behavioural issues ranging from anorexia to self harm and attempted suicide. Unsurprisingly it took Joe a while to settle, but unusually for an anorexia sufferer he was determined to get better and despite the odds seeming to be towering against him at times, he did get better. He learnt a huge amount during his struggle with anorexia and has become much more sensitive to other people’s needs. When I broached the subject of writing this book he responded:

“If one other family benefits from reading about our experiences then it will have been worthwhile”.

I hope my book will provide encouragement to anyone who is involved in caring for, or treating a young boy with eating problems. This includes parents, people working in health centres, clinics and hospitals and also youth support groups, teachers, school nurses and sports coaching staff,who are often the first to be aware of concerns about eating disorders in young men.

Anorexia is a terrifying experience for any family to go through, but remember:

And most importantly you are not alone